The eagle eyed may have noticed something different about Google’s search result pages lately and wondered what is happening.

Some people have reported that Google has started to show answers to questions typed into the search query box and nothing else – no organic search results, no paid results. Instead the only thing Google displays along with the answer is a “show all results” button.

In an experiment example that someone posted online, searching for the local time in Los Angles brought back the following page: 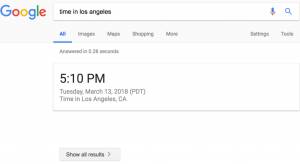 The change was later confirmed on Twitter by one of Google’s team who stated that this was currently an experiment designed to see what a smaller and compact view of the results page would look like in an attempt to make a greater impact in speeding up the load time of the page.

It is believed that for certain search queries users will only be interested in seeing the answer and not all the other pages that come with it, so it make sense to shorten the page. The option still remains however to see the results page as usual (by clicking the “show all results” button.)

Beyond asking what the time is (which is the article example) it is not clear what else this would apply to, but the consensus is similar types of things where the answer is a fact such as ‘what day of the week is it’ or ‘when does the sun rise in Birmingham.’ Questions like what is 9 X 9 or 100cm in mm are also likely to display the same kind of format.

Once learning of this ‘experiment’ some people decided to press Google and ask whether this was likely to be a permanent change. Google replied by saying that everyone will see this change at some point but it is an experiment only at this stage and so may not become permanent. Google have hinted that their testing results were good, so don’t be surprised if this does feature in the future.

The wider and industry view has been a little more mixed about this current trial. Some people have questioned whether this is simply another step at watering down organic search results so they become less relevant in the industry. Others have questioned what benefit doing this would be to Google by hiding organic and particularly paid search results. Some people have also asked what topics or questions asked in the query pane should this apply to and who decides that?

At the time of writing we have tried this experiment ourselves, and everything is working in the normal way, and it is reported that Google have halted the test for now. Despite what could be conceived as a relatively small experiment, this has generated quite a lot of debate about the wider and deeper meanings behind it. Will Google continue to push more changes through and who will really be advantaged by this? If we go back to the quote in the image for this posting it would seem that this would be very true!

To find out more on SEO, including our video on why your business needs an SEO strategy, click the link now.