Open up a Google search window on the desktop and type in something generic. Have a look at our example below, we have gone with “holidays”: 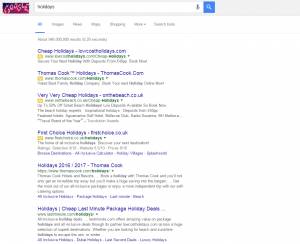 This move has now brought desktop results similar to those that appear on mobile so at least the whole searching process is now a little more uniform.

What is the real effect of this change though?

Probably down to money!

It has been documented, that Google’s search revenue for ads has fallen and like anything, if there is a fall then the gap has to be plugged somewhere. The actual process of this is very clever (and some would argue coy) indeed. When the ads appeared on the right hand side of the page on desktop search, there were many more than four displayed. Now this has moved (and more significantly the number of appearing paid ads cut,) it forces the price upwards as more people try to bid to get at those elusive four places. The result is obviously extra revenue for Google.

Of course Google would state that it is more than just about money and to be fair to all sides of the argument this is probably correct also:

1) The principles of ‘supply and demand’ come into it, making it better for searchers and consumers.

2) It injects more zest, energy and therefore competition into the arena.

It has been reported that this idea has been tested for quite a while and logically looking at it, it is part of Google’s many changes to make the search engine more about what the user wants and expects. However let’s be clear…as we explored in a previous article, don’t forget that Google is a business first and a search engine second! It needs to make money and profits just like anyone else.

Interested in more about paid ads and PPC? Visit our PPC section.